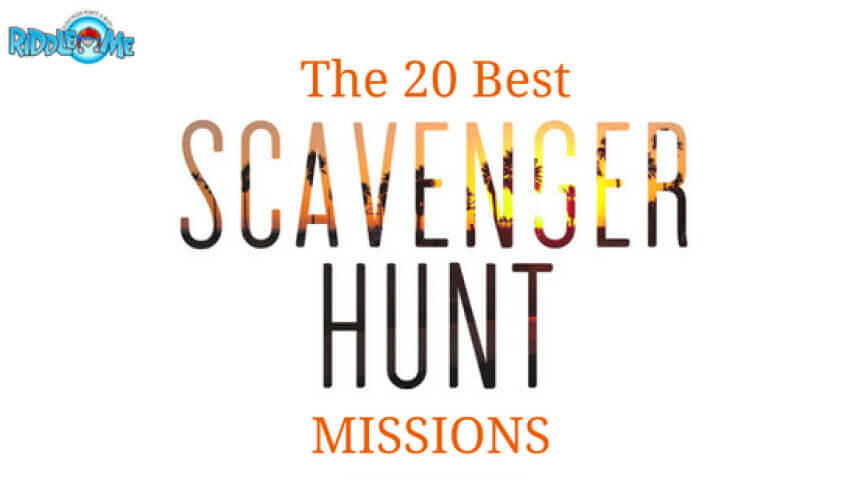 Create a scavenger hunt mission that’s sure to please whatever hunting crowd you are planning for. When you turn the hunt into a mission, the challenge of the hunt becomes front and center and it’s easy for those on a team to coalesce around a common task. Include a prize at the end, and it becomes easier still to get teams to head towards the end goal. If you are looking to team build or simply make a fun scavenger hunt for kids, consider one of these missions.

Take the kids favorite books and create scavenger hunt games at the library. Find a group of books that the children have read and enjoyed. Then take memorable moments from each book and create clues with the help of Riddle me, that will lead the children to a particular scene from the story. On the specific page of the scene, place the next clue that points the way to the next story. Part of this mission will be remembering the title or author of the book and using that to look up the location of the book in the library. As long as the children promise to be quiet and respect the library rules, this should be a fun to learn excursion.

For this mission, you’ll have to create a simple code where each letter of the alphabet is coded with a particular number. Each team of hunters will start out with their first riddle. The answer to the riddle will be visible, coded with numbers. The team will have to come up with the correct response to determine which letters correspond to which numbers. The riddle will direct them to the next clue where they will again do the same. At the very end, they can review their clues and riddle solutions to see if they want to make any changes to their cipher. If not, they can submit it for review and see if they are the first team to successfully crack the code.

If your kids are into zombies, create a spooky mission for them. Similar to the Walking Dead, you’ll divide the group into two teams, complete with the necessary gear to successfully survive a zombie apocalypse. Then each team will set out on a mission. Along with their path to completion, they will encounter solo zombies or zombie groups. In order to kill the zombies, they will have to properly solve any riddles that come their way. At the end, if they’ve killed all the zombies they’ve encountered through correct riddle solutions, they’ll win the apocalyptic challenge.

Time for a scavenger hunt outside. For this hunt, create a proper treasure map where the X that marks the spot remains elusive. The map will actually contain nearly a dozen X’s, with only one being the location of the hidden treasure. Teams will go from one designated location to the next collecting clues that will help them rule out all but one of the treasure locations. Once they’ve narrowed it down, they’ll head over to the final X and dig to unearth their hidden treasure.

Another good outdoor hunt is to create a scavenger hunt to explore a new city or town that you are visiting. Make clues with the help of Riddle me, that direct your group of hunters to various sites and scenes throughout the city. Once they solve a particular clue, they can head to the next site, check it off their list of places to visit and find the riddle that will direct them to their next location. No one ever said that scavenger hunt games and city tours don’t go well together.

Solve a series of clues that will lead you to the solution of a staged mystery. Using the basic idea of a murder mystery game, convert it into a scavenger hunt with the help of Riddle me, and have teams uncover clues that will help them solve the mystery at the end.

This scavenger hunt is great if you have limited space and kids who love to create in the kitchen. Place a bunch of smoothie ingredients on a table and provide each group of kids a recipe of riddles. Each successful riddle solution will point the kids in the direction of one ingredient. When they think they’ve solved it, they’ll have to measure out the quantity listed and add it to their blender. Finally, they’ll check their smoothie concoction to see if they have created the correct smoothie solution.

A simple scavenger hunt for kids that can be played in any location. This mission involves finding something in a designated hunting area that begins with each and every letter of the alphabet. It can begin to seem like a mission impossible in its own right, but the winning team will use good teamwork to find something that works from A to Z. Fill in your alphabet sheet with each item found and be the team to complete the alphabet first.

Hang a pinata for each team in a tree outside. Have the teams whack open their pinata to reveal puzzle pieces, some candies and a handful of clues. The team can work together to both put the puzzle together and solve the clues which will lead them to a few hidden pieces that they will need to successfully complete their puzzle. Once their puzzle is complete, they can claim their victory.

Create a museum mission so you and your group are sure to see all the best exhibits and displays. Following a series of clues and riddles, make your way through any local museum by making a game of the journey.

Here is one of many scavenger hunt games that can be played using visual clues, which are great for early learners. Arm the children with a list of animal tracks and the animal who creates them. Head out into the forest for a nature walk to search for prearranged ‘animal tracks’. Special points to any kid who spots one of the listed animals in the wild.

Armed with riddles that highlight trivia from past Olympics, create an Olympic scavenger hunt mission that includes both mental and physical challenges. Award bronze, silver and gold medals to the teams according to the times they successfully complete their Olympic-inspired missions.

Here’s another fun challenge for the younger crowd. If you have a large backyard garden or live near a community garden, send the kids into the garden to pick some veggies. With a pictorial list of vegetables and a basket, send them out to get dirty, pick their list of vegetables, and teach them where their food comes from all at the same time. Bonus points if they spot a ladybug or a spider’s web.

This one can be a good mission for those who like scavenger hunt movie marathons. Choose a lengthy trilogy, like the Indiana Jones movies or some of the Star Wars movies and have everyone watch the movies in succession. Then, while fresh in their mind, they’ll have to complete a scavenger hunt that uses clues from the movies. In order to have success with their mission, they’ll have to pay attention to detail.

A good scavenger hunt for little kids is to hide one of a pair of objects, like a group of Memory cards or socks. Give the kids the other set and have them search in a designated area until they complete their mission of matching all their items with the proper mates.

Make sure the kids are prepared to fight for their team because this scavenger hunt features rounds of riddle solving, and similar to musical chairs, if you’re the last team to solve the riddles of the round, then you are knocked out of the scavenger hunt and must watch as the remaining teams battle to knock one another out to become the victor.

With a bit of preparation, this mission is bound to leave kids bursting with excitement. Blow up a number of balloons, tucking a rolled up scroll inside each balloon before tying it off. In order to complete the scavenger hunt, the children will be given a clue to a specific balloon. Once they find it, they’ll have to pop it open to reveal the next secret clue to their next location or balloon. After successfully completing their series of clues, they’ll burst a final balloon that holds the grand prize.

To complete this scavenger hunt mission, the kids will receive a small booklet of picture clues. The pictures will feature an extreme close-up photo of an object that they must find and collect. If they bring back each item featured in their picture book, they’ll have earned the prize that awaits them.

Complete with scavenger hunt movie trivia, this mission depends on the teams having a good knowledge of some classic Hollywood films and actors and actresses. As the team solves each riddle and clue, they advance to the end of the challenge where they’ll be able to graciously accept their scavenger hunt, Oscar.

Sign up today with Riddle Me for a few of the best scavenger hunt missions that you can try out and have some amazing fun.