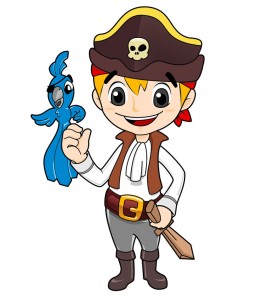 Looking for that perfect pirate treasure hunt for your children to play at a birthday party? Riddle Me is your pirate ship to adventures in Neverland. With thousands of clues and riddles to choose from, you can customize an awesome pirate scavenger hunt for your child’s party.

Start off by logging into your Riddle Me account and create a hunt for each group of “pirates” in your pirate treasure hunt.

Select an appropriate background image for the clues for each team of players. It’s best to have teams of 3-5 players compete against each other to see who will find the treasure first.

If you want to set a final location at a sandbox or somewhere the children have to actually dig up a treasure box, just set that up in your hunt. You can bury something in a plastic bag that contains a birthday present or treats for the players. You can also just have a prize in your house and avoid the extra work if you want. Customizing the hunt is part of the fun.

In step 3 of the hunt where you can add optional activities to the clue cards, select the pirate category and add random fun to each of the clue cards so players have to do pirate-like things along the pirate treasure hunt path like saying things pirates say, or pretending to have a sword fight.

Then print the clues and tape them where they go around your home and gather the pirates to start the hunt.

Name each crew (team) after a real or fictional pirate they might recognize like Blackbeard, Barbosa, Jack Sparrow, Hook, and the Dread Pirate Roberts. Tell them it’s their job to find the treasure chest for their captain before the other pirates do. Each clue will lead them one step closer to the treasure and anyone whose crew fails to find the treasure will have to walk the plank or maybe drink pirate grog (a nasty tasting drink you could make like blended spinach leaves or something. Healthy and safe, but gross tasting. :))

Hand players the first clue and watch them go.

At your final location, you might have a buried treasure, or just lead them to the treasure of presents the children brought for the party. (move them to your planned final location when the hunt begins and you aren’t being watched)

Your final location could have a cake decorated to look like an island. The island cake could have “treasure” inside it that they would discover as they cut or “dig” on the “X” marking the spot. To try this get a set of miniatures like this one from Amazon and bake them into the cake. Make the cake mix and put it into your baking pan and then strategically shove each miniature into the cake at a planned spot so each child would get a piece of cake with a miniature in it.

Here are some other inexpensive and fun party accessories you can use to spice up the theme for your party.

This site uses Akismet to reduce spam. Learn how your comment data is processed.